How to Support the A9GB Campaign

If you wish to support the A9GB campaign, these are some of the things you can do to help, most will only take a moment: 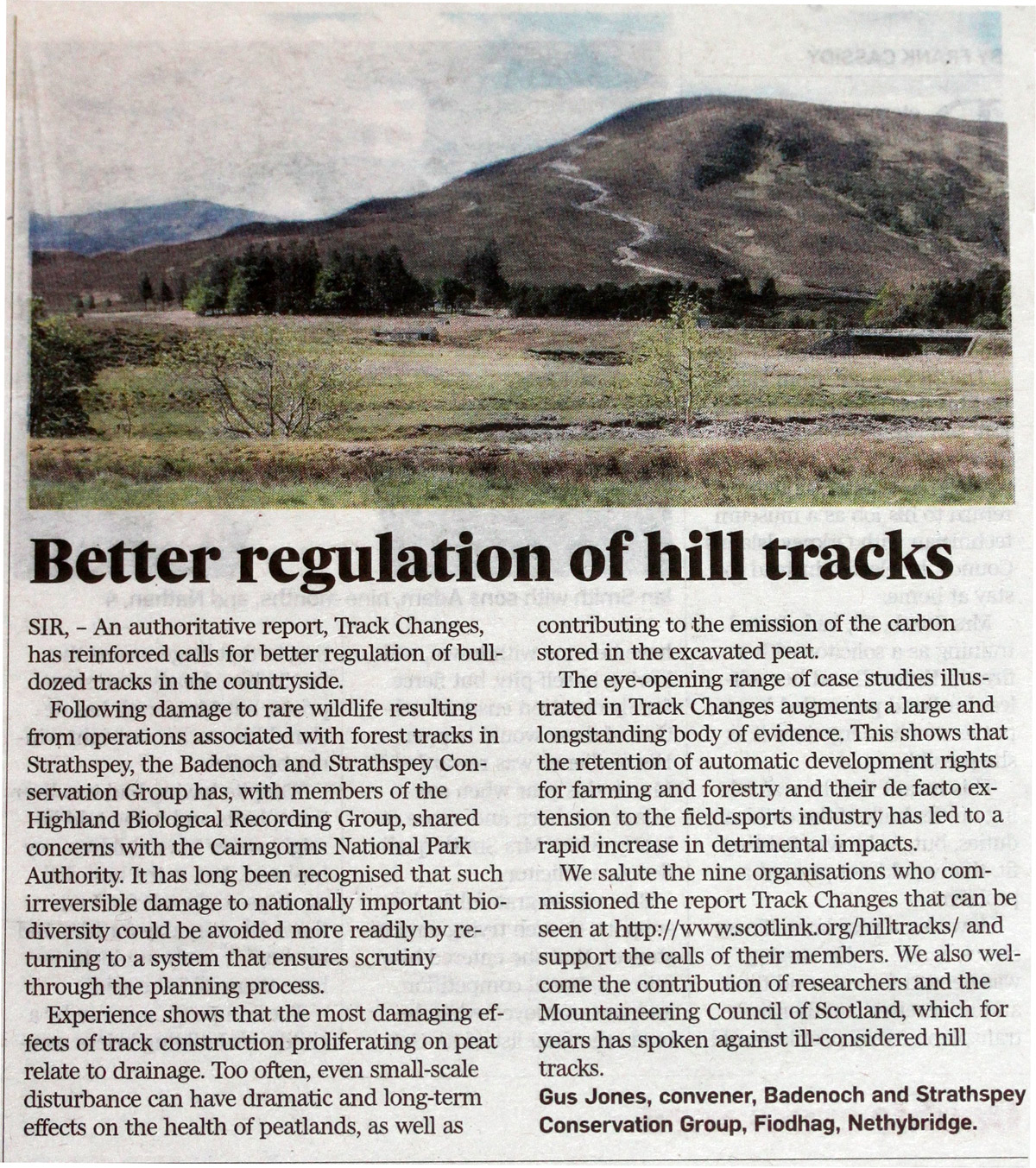 SIR, - An authoritative report, Track Changes, has reinforced calls for better regulation of bulldozed tracks in the countryside.

Following damage to rare wildlife resulting from operations associated with forest tracks in Strathspey, the Badenoch and Strathspey Conservation Group has, with members of the Highland Biological Recording Group, shared concerns with the Cairngorms National Park Authority. It has long been recognised that such irreversible damage to nationally important biodiversity could be avoided more readily by returning to a system that ensures scrutiny through the planning process.

Experience shows that the most damaging effects of track construction proliferating on peat relate to drainage. Too often, even small-scale disturbance can have dramatic and long-term effects on the health of peatlands, as well as contributing to the emission of the carbon stored in the excavated peat.

The eye-opening range of case studies illustrated in Track Changes augments a large and longstanding body of evidence. This shows that the retention of automatic development rights for fanning and forestry and their de facto extension to the field-sports industry has led.to a rapid increase in detrimental impacts.

We salute the nine organisations who cormmissioned the report Track Changes that can be seen at http://www.scotlink.org/hilltracks/ and support the calls of their members. We also welcome the contribution of researchers and the Mountaineering Council of Scotland, which for years has spoken against ill-considered hill tracks. 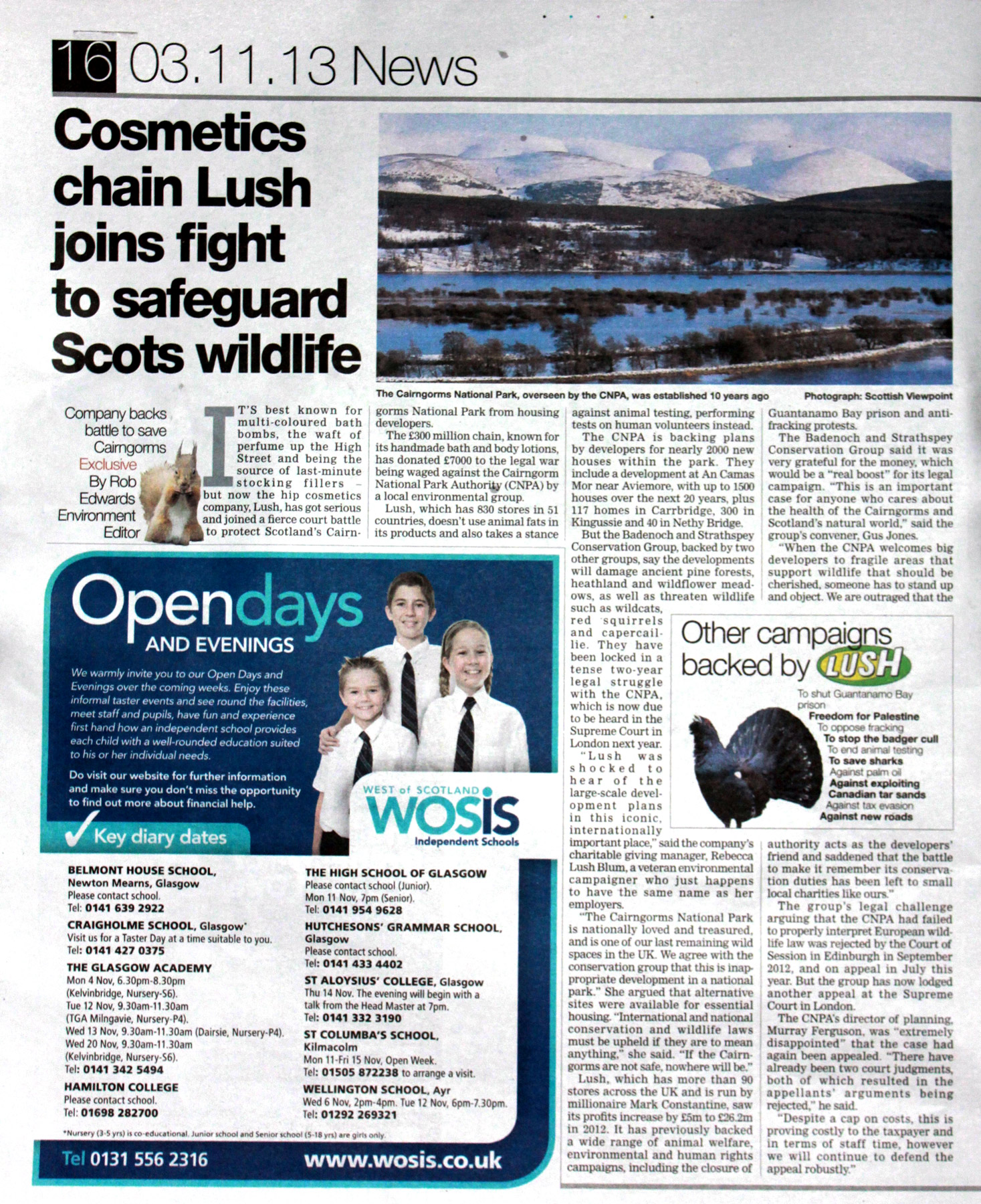 IT'S best known for multi-coloured bath bombs, the waft of perfume up the High Street and being the source of last-minute stocking fillers - but now the hip cosmetics company, Lush, has got serious and joined a fierce court battle to protect Scotland's Cairngorms National Park from housing developers.

The £300 million chain, known for its handmade bath and body lotions, has donated £7000 to the legal war being waged against the Cairngorm National Park Authority (CNPA) by a local environmental group.

Lush, which has 830 stores in 51 countries, doesn't use animal fats in its products and also takes a stance against animal testing, performing tests on human volunteers instead.

The CNPA is backing plans by developers for nearly 2000 new houses within the park. They include a development at An Camas Mor near Aviemore, with up to 1500 houses over the next 20 years, plus 117 homes in Carrbridge, 300 in Kingussie and 40 in Nethy Bridge.

But the Badenoch and Strathspey Conservation Group, backed by two other groups, say the developments will damage ancient pine forests, heathland and wildflower meadows, as well as threaten wildlife such as wildcats, red squirrels and capercaillie. They have been locked in a tense two-year legal struggle with the CNPA, which is now due to be heard in the Supreme Court in London next year. 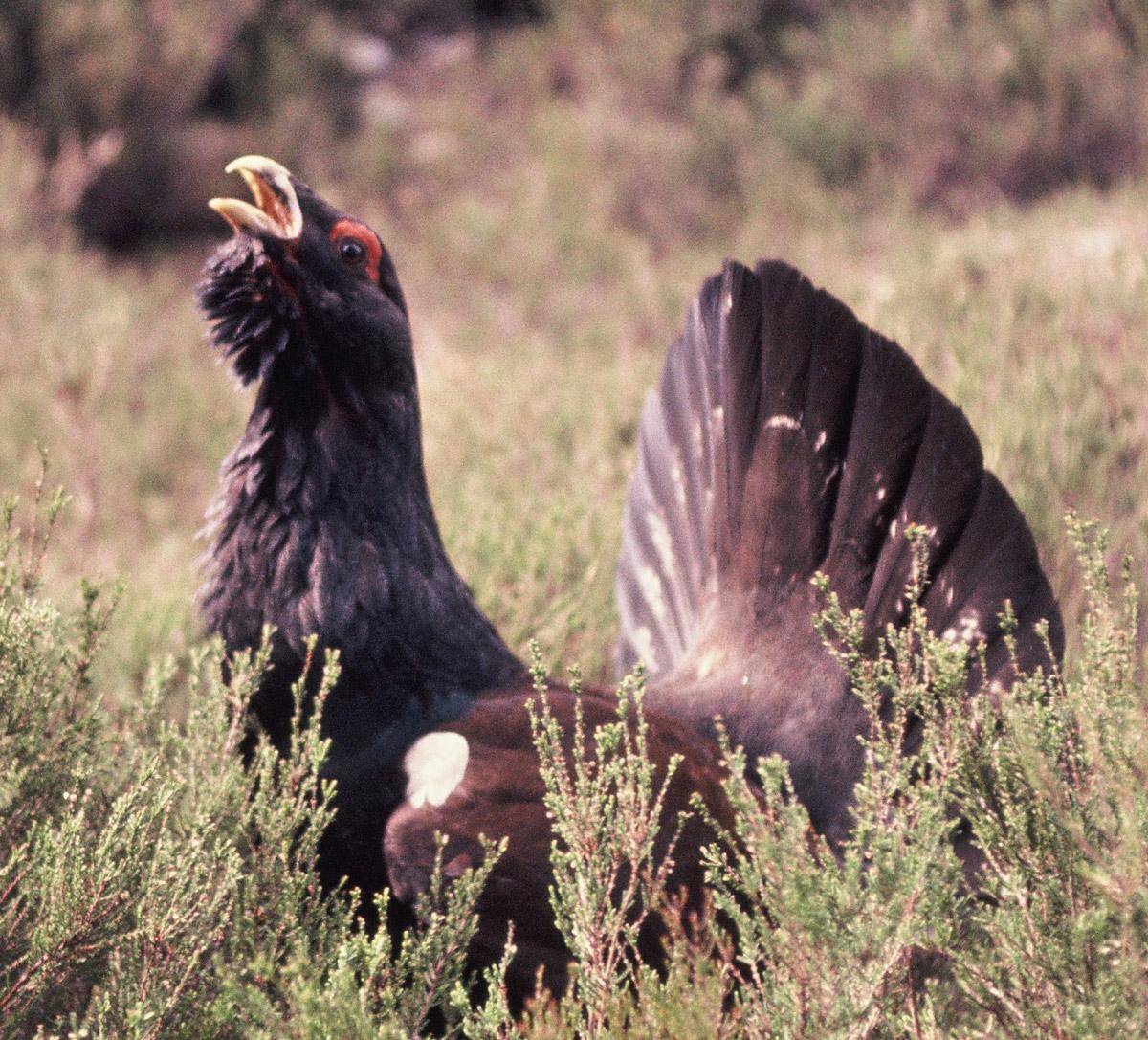 "Lush was shocked to hear of the large-scale development plans in this iconic, internationally important place," said the company's charitable giving manager, Rebecca Lush Blum, a veteran environmental campaigner who just happens to have the same name as her employers.

"The Cairngorms National Park is nationally loved and treasured, and is one of our last remaining wild spaces in the UK. We agree with the conservation group that this is inappropriate development in a national park." She argued that alternative sites were available for essential housing. "International and national conservation and wildlife laws must be upheld if they are to mean anything," she said. "If the Cairngorms are not safe, nowhere will be."

Lush, which has more than 90 stores across the UK and is run by millionaire Mark Constantine, saw its profits increase by £5m to £26.2m in 2012. It has previously backed a wide range of animal welfare, environmental and human rights campaigns, including the closure of Guantanamo Bay prison and anti-fracking protests.

The Badenoch and Strathspey Conservation Group said it was very grateful for the money, which would be a "real boost" for its legal campaign. "This is an important case for anyone who cares about the health of the Cairngorms and Scotland's natural world," said the group's convener, Gus Jones.

"When the CNPA welcomes big developers to fragile areas that support wildlife that should be cherished, someone has to stand up and object. We are outraged that the authority acts as the developers' friend and saddened that the battle to make it remember its conservation duties has been left to small local charities like ours."

The group's legal challenge arguing that the CNPA had failed to properly interpret European wildlife law was rejected by the Court of Session in Edinburgh in September 2012, and on appeal in July this year. But the group has now lodged another appeal at the Supreme Court in London.

The CNPA's director of planning, Murray Ferguson, was "extremely disappointed" that the case had again been appealed. "There have already been two court judgments, both of which resulted in the appellants' arguments being rejected," he said.

"Despite a cap on costs, this is proving costly to the taxpayer and in terms of staff time, however we will continue to defend the appeal robustly."

Warnings have been given about traffic accidents involving deer see http://www.scotsman.com/news/transport/highland-motorists-warned-of-deer-collisions-risk-1-3158107. It is not just deer that fall victim to busier roads and roads without safe crossing places. In Badenoch and Strathspey we have a special responsibility for some species that are vulnerable to road traffic accidents. These include wild cat which is critically endangered in Scotland and otters which are one of the features of the River Spay and Tributaries Special Area of Conservation. More frequently observed victims include red squirrel and badger. The full casualty list is long and includes brown hare, pine marten, stoats, toads and newts. Birds include adults and chicks of waders such as oystercatchers and lapwings. Young barn owls are particularly vulnerable to busy main roads see http://www.barnowltrust.org.uk/infopage.html?Id=180. Also at night bats foraging near minor roads can also be hit. 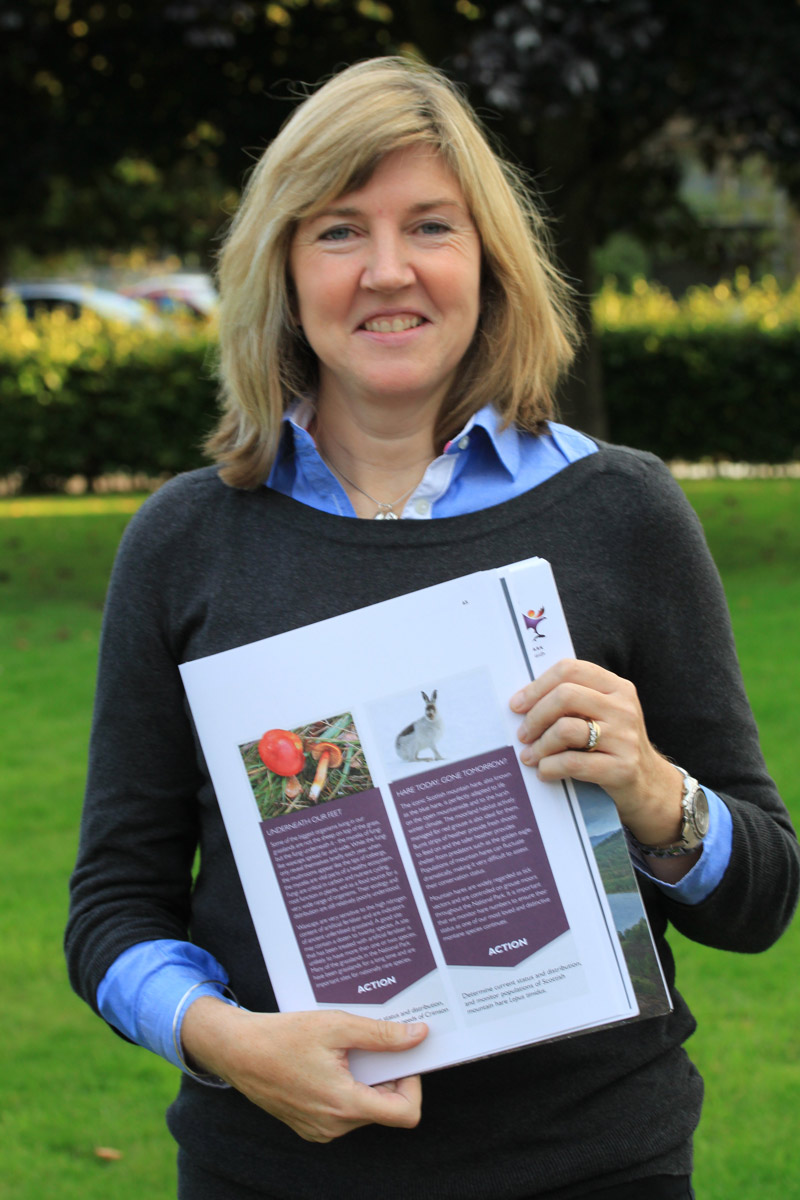 This year BSCG has raised concerns with politicians and senior CNPA staff about escalating road kills. For example we mentioned this problem to the parliamentary species champion for the brown hare, Alison Johnstone MSP, alerting her that there will be a predictable and potentially very serious, increased mortality risk for brown hares in the Carrbridge and Rothiemurchus - An Cama Mor area if controversial developments are allowed. Road mortality might be contributing to an apparent decline of brown hares in Badenoch that has already been reported to BSCG. 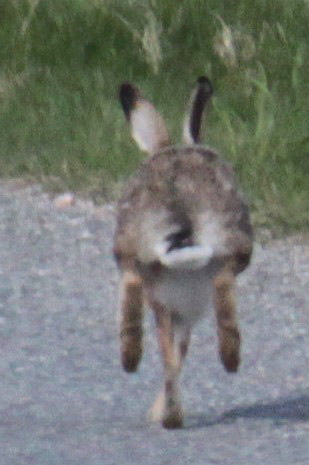 Brown Hare on Carr Road near Carrbridge. Controversial new housing would add to traffic on this quiet and exceptionally wildlife-rich minor road, increasing the toll of wading birds, hares and other protected wildlife. 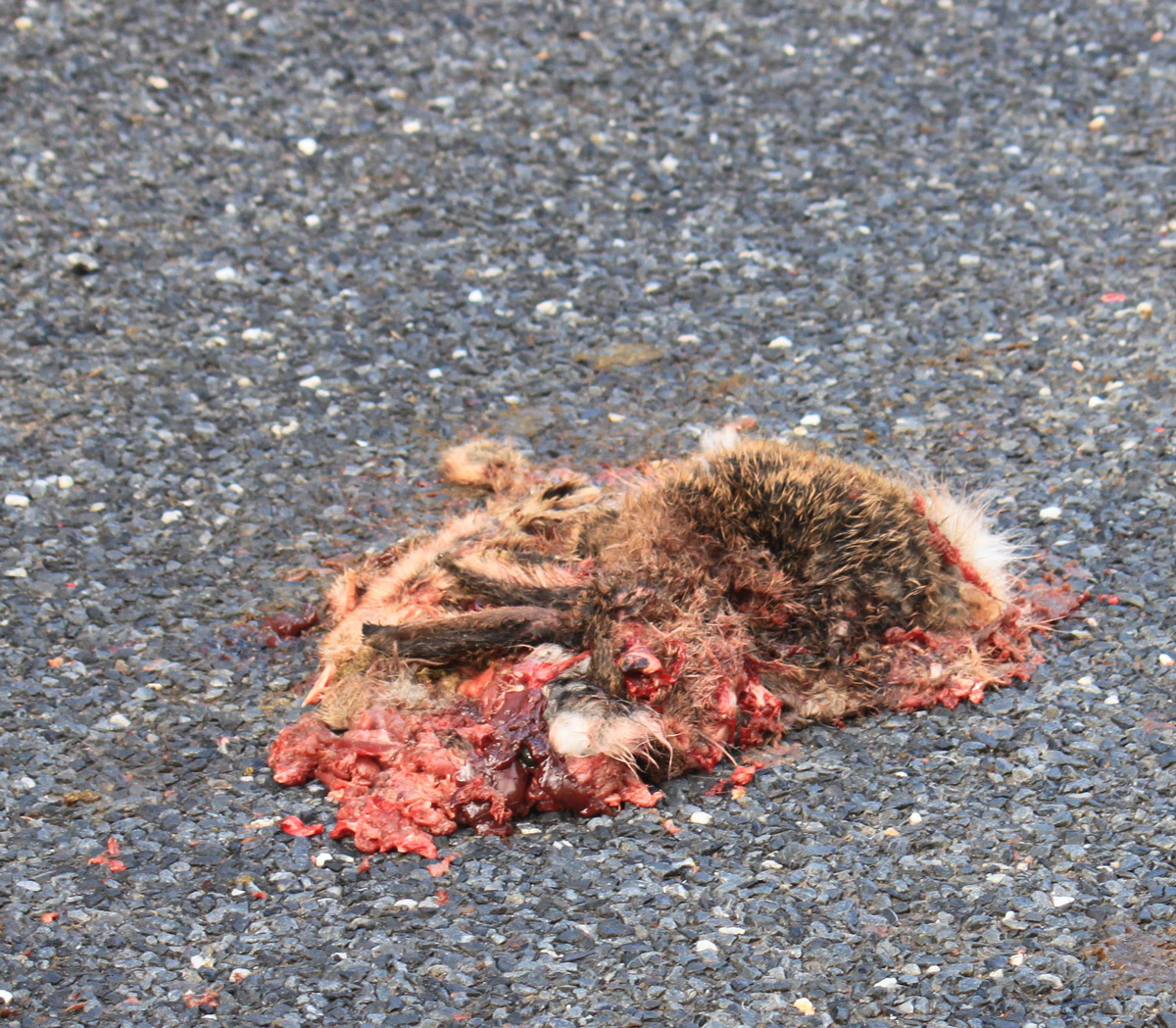 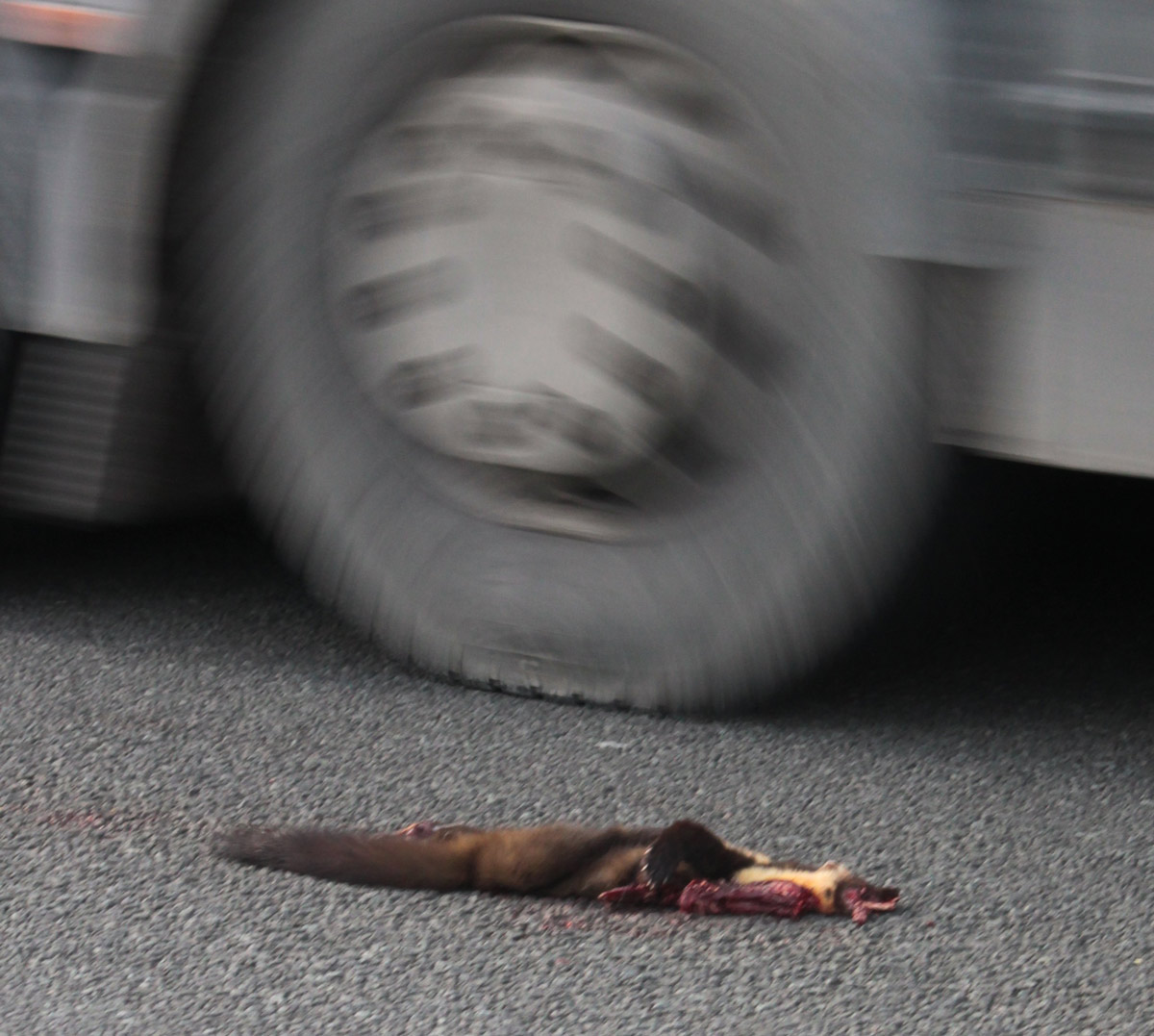 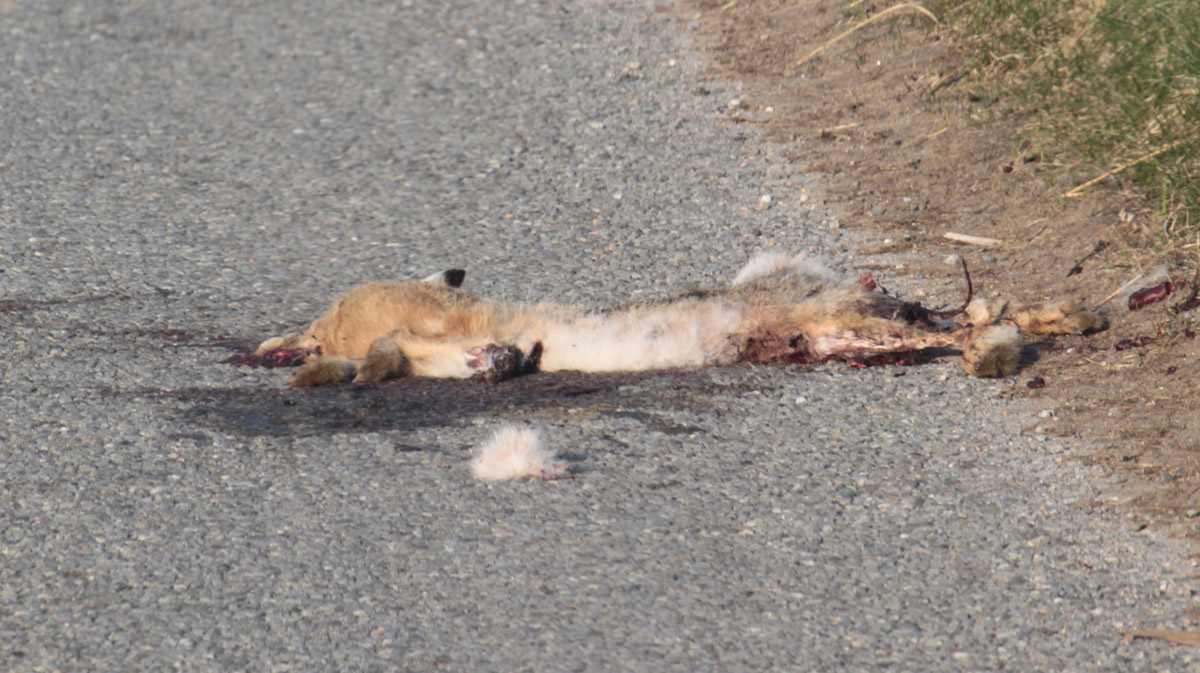 Brown hare on the B970, the 'back road' between Boat of Garten and Coylumbridge. As well as brown hare, otter,red squirrel, badger,pine marten and even wildcat mortality will inevitably increase if the An Camas Mor new town development beside the B970 goes ahead. 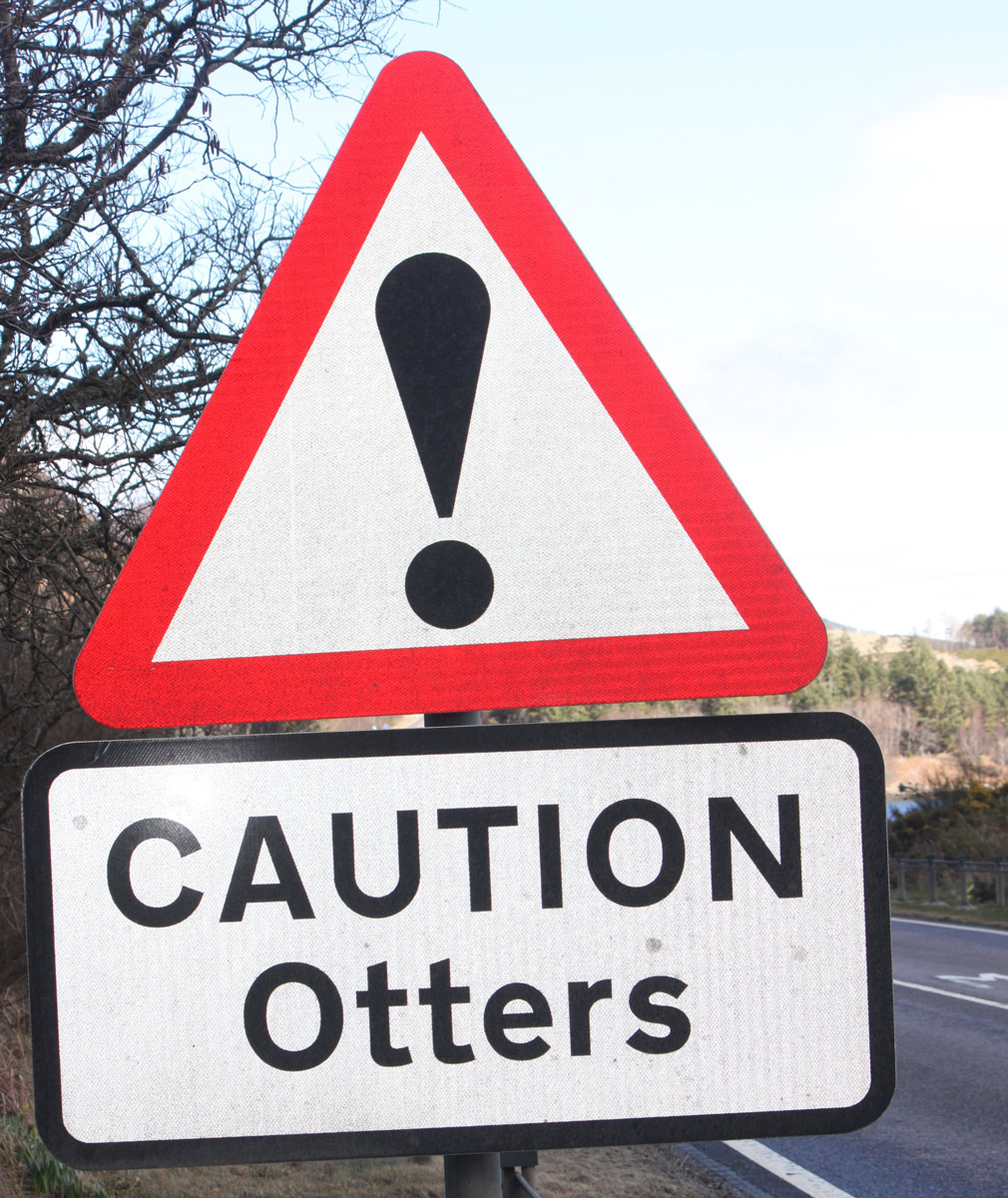 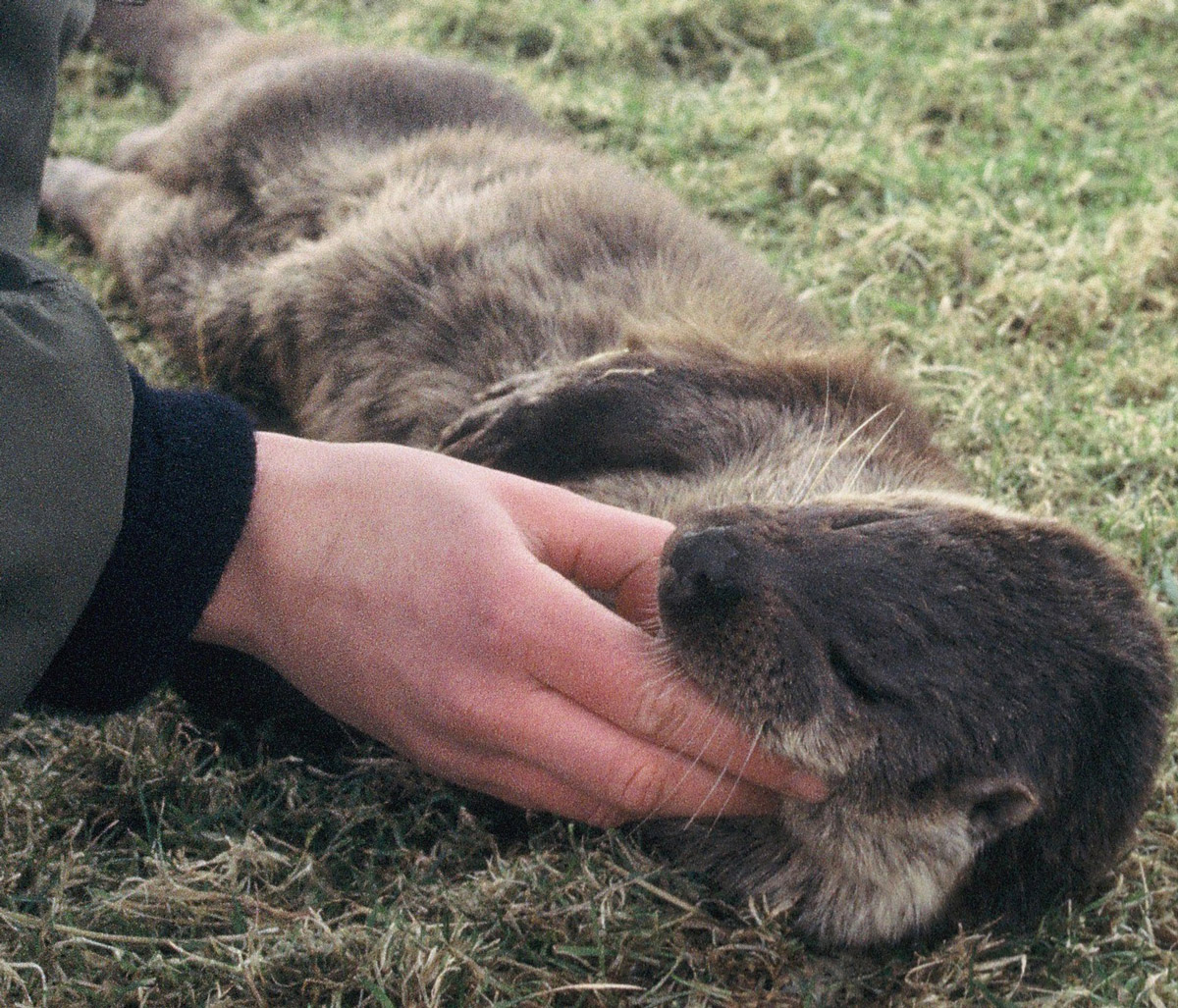 Otters and wildcat typically cross roads at night when they can be difficult for drivers to see unfortunately signs alone cannot eliminate mortality.

Female capercaillie. Ground nesting birds like capercaillie are vulnerable to opportunistic egg predators like crows and gulls, whose numbers may increase where extra food is provided by road kills. 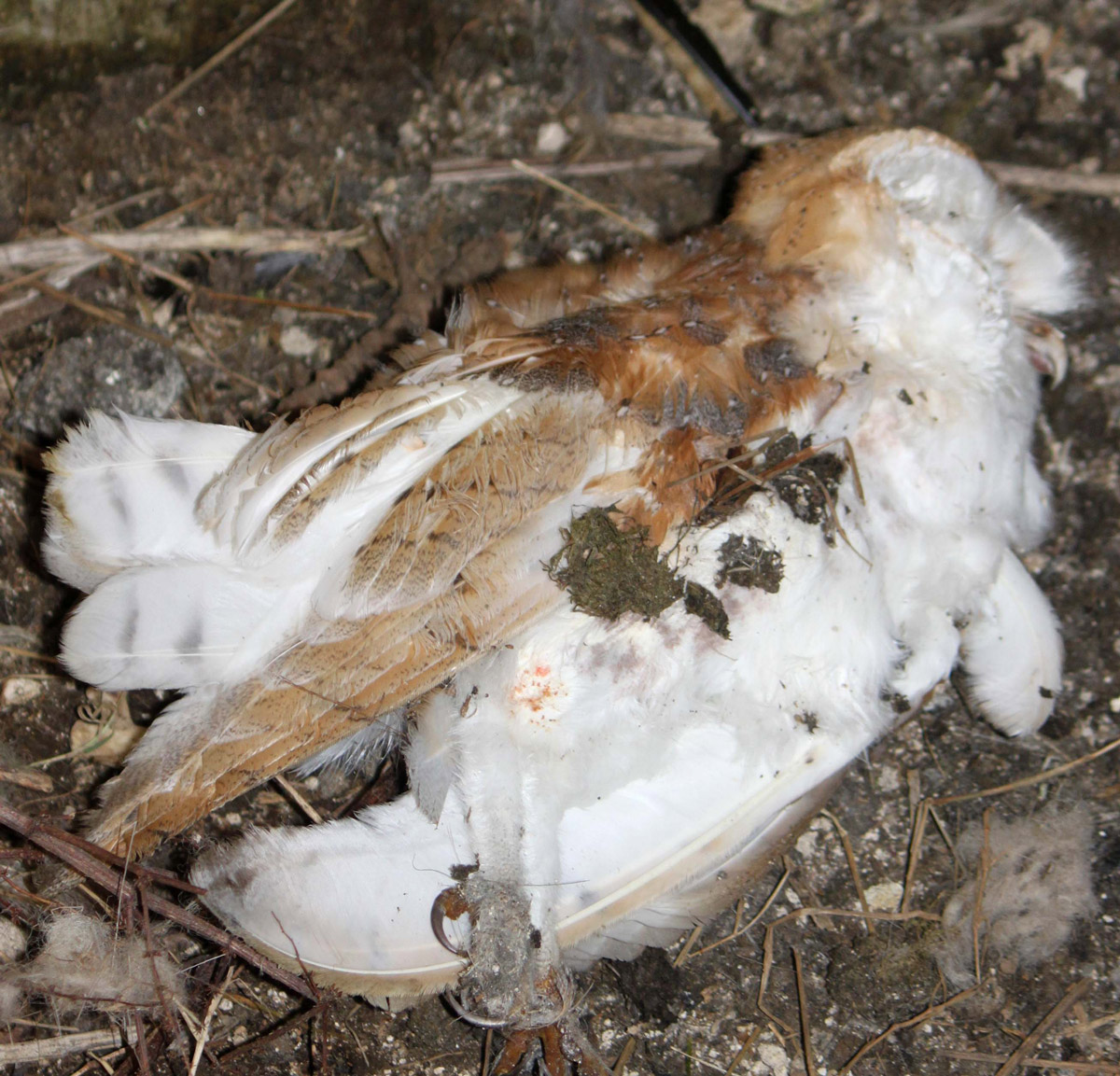 Research on barn owls has shown that road deaths are greatest on young owls and affect ones that have escaped mortality from other causes such starvation. 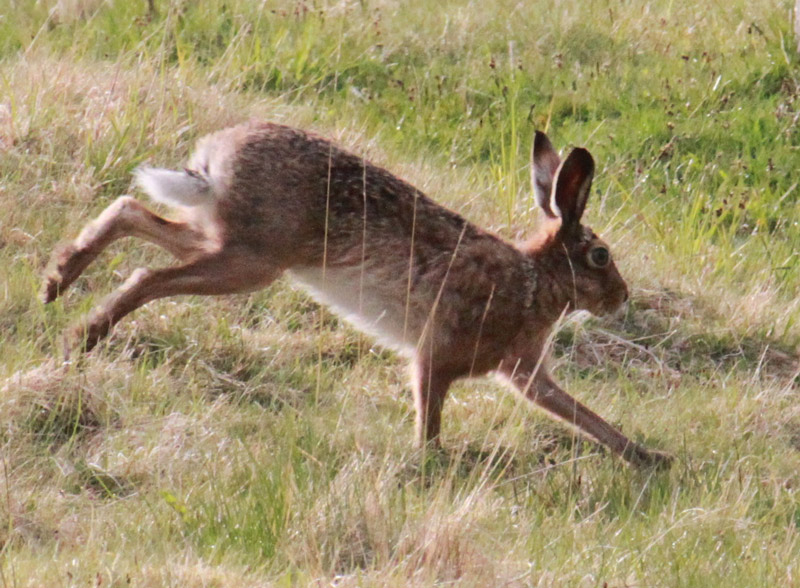 Alison Johnstone, Parliamentary Species Champion for the Brown Hare, has described the U-turn as a "small victory".

BSCG welcomes the Scottish Government's confirmation that they have decided to exempt the planning system from a duty to contribute to economic growth.

On 11 September 2013 Fergus Ewing (local MSP and Minister for Energy, Enterprise and Tourism) wrote in a letter to the Convener of the Economy, Energy and Tourism Committee Murdo Fraser MSP:

"we are minded to bring forward a Stage 2 amendment that will make it clear that the planning functions of a local authority are not subject to the proposed duty to contribute to sustainable economic growth."

BSCG, with others, has long been concerned at the Government's over-emphasis on economic growth.

Alison Johnstone, Green MSP and Species Champion for the Brown Hare, commented that the duty could have become a "developer's charter" and that "this u-turn is a small victory."